In a decision of April 20th, 2022 (here in French), the French Supreme Court decided that an employer could validly dismiss an employee for having made a sexist joke.

What is the case about?

The claimant was an employee of a TV production company for which he hosted a show where couples compete with eachother over questions regarding their love life.

According to his employment contract, the host had committed to respecting the policies of the TV chan- nel broadcasting the show. This policy specifically required him not to make hateful or contemptuous com- ments on the basis of sex and not to promote sexist violence, regardless of the media he would appear in.

In 2017, the TV host, who is also a comedian, was invited on another TV channel to promote his latest one-man show. At the end of the show, he was invited to make one last joke, which he formulated as follows: “As this is a very sensitive topic, I’ll take a stab at it: do you guys know what you say to a woman who al- ready has two black eyes? – It’s a terrible one! – We don’t tell her anything anymore, we’ve already ex- plained it to her twice!”

This “joke” led to a big controversy.

A few days later, during his own show, the host re- ferred to the controversy around his joke and made other sexist comments to one of the women candi- dates.

In a recent article, Alexandra Frelat, Partner at our French member firm MGG Voltaire examines the topic and analyses more specifically the legal issues at stake related to the appeal filed by the host with the French Supreme Court following the validation of the dismissal by the Employment Tribunal and the Court of Appeal. In particular, she touches upon the question as to whether the dismissal could represent a disproportionate infringement of the employee’s freedom of speech.

The author Alexandra Frelat was recently promoted to the position of Partner within MGG Voltaire. For any questions about this topic or any other employment law concern, please contact her or any other expert at MGG Voltaire to see how they can assist. 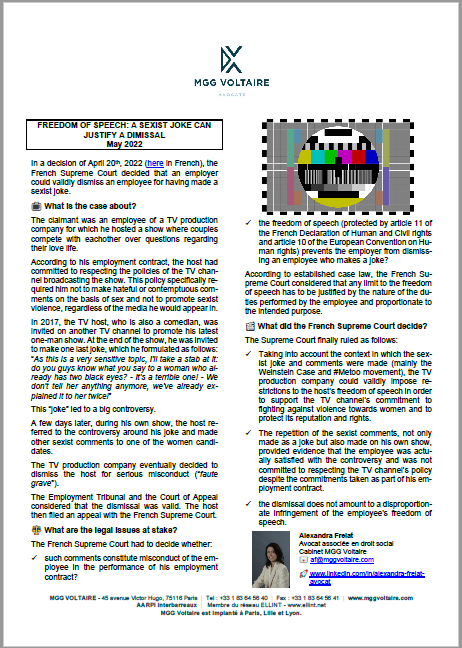